It's all about Confidence

So I never made it out on that ski outing I promised to write about in my last post.  Damn 8 am meetings! But I did make it out for some Tram laps at Snowbird for a couple of hours on Saturday. Here are a couple of philosophical thoughts that came from that.

So my brother and I both lived in Mexico for a couple of years. Neither one of us has been back for a long time. His company is opening up Mexico for business and he went down to the Distrito Federal to get the ball rolling. As we were talking the other day we were discussing his trip and I was asking him how his Spanish was holding up. He mentioned that he was a little rusty and was a bit hesitant to break into his Spanish until after he had built up some confidence after having been there for 4 or 5 days. We talked about how it takes some confidence to go bust into the christian tongue.

So what does that all have to do with skiing? 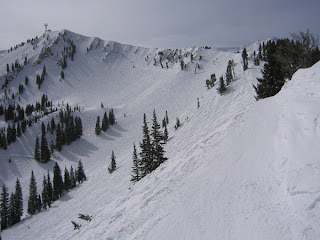 While I did get out for a quick lap in the backcountry a couple days before Halloween I haven't really skied for about 6 months or so. I knew that this day would be a good chance to tune up my technique. When I got to Snowbird Saturday morning I went straight to the ticket office to pick up my pass for the year. After sifting through 5 or 6 other Jon Jameses in the computer system, the nice guy in the ticket office finally found me. Who knew there were so many season pass holders with the same name? 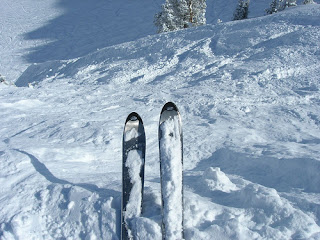 I was scheduled to meet up with some friends, but I was 99% sure those friends would be late. So I headed out to see what lifts were open. After a quick discussion with one of the Ski Patrollers I figured I would hit the tram before they shut it down for the day due to high wind gusts (the forecast said there had been gusts up to 90 mph the night before). After I fumbled my way down Chips to try and remember how to ski I  quickly headed back up to see what the Cirque had to offer. The traverse to get out there was pretty bare and riddled with rocks and grass. After picking my way through it and getting my face sandblasted off with ice crystals from big gusts of wind, I made it out to the upper cirque. The snow coverage didn't look great so I worked my way down the traverse until I found myself at the lower portion. The coverage was good and there wasn't a track on it. After gathering myself I dropped in and couldn't believe how good the snow was. I started ripping turns and picking up speed. My brain shut off and my legs took over. After catching some air off the lower roller at the bottom I stopped, looked back up and smiled about as big as you can. It was so good that I headed straight back down and caught the next tram car up. I must have done 5 or 6 laps through the same run throughout the day. Every time I went back the wind had swept it clean of any tracks. Each time down I would take a little faster and ski a little more confidently. About mid day I met up with my friends and took them back up there. We weren't disappointed as we crested the top and looked down into an untracked field of snow. My friend commented at the bottom that he felt a bit tentative, but couldn't help but notice the way I was charging it. I had to come clean with him and tell him that was my sixth time down the run that day.

It had me thinking about confidence. How it determines so much of our attitude and the way we approach life. Life is so much more enjoyable when you attack it with gusto. Everything from speaking Spanish to attacking a hill on skis. So be confident. Know what your talents are and believe in yourself.

The weather man says I will be waking up at 4:30 am on Tuesday to test the goods. Hopefully this time I'll make it out and will have a story to tell.
Posted by Jonnie J at 4:00 PM 2 comments:

Ya I'm the last guy to the cool kid blogging party.

I have been meaning to start a blog for something like 4 or 5 years. But you know how busy a guy can be when he is married, has a full time job, a wife, 2 mortgages and 4 kids? I recently bought a new Mac Book Air which has had me playing around in the evenings just because Steve Jobs has made it so fun. 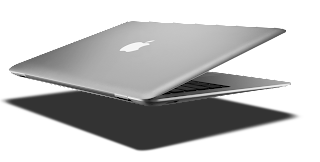 So tonight I make my first blog post. I'm not a great writer but I do go on some cool adventures and this will serve as a good way for me to keep track of those and share a few pictures along the way. Ski season is just about to kick into full swing. I've got some new gear that I am itching to get out and try out. 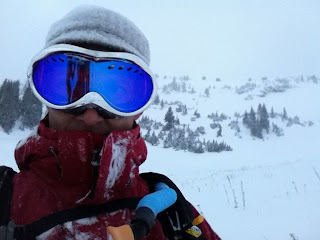 I'm headed out Wednesday morning for some dawn patrol action. Pictures to follow.